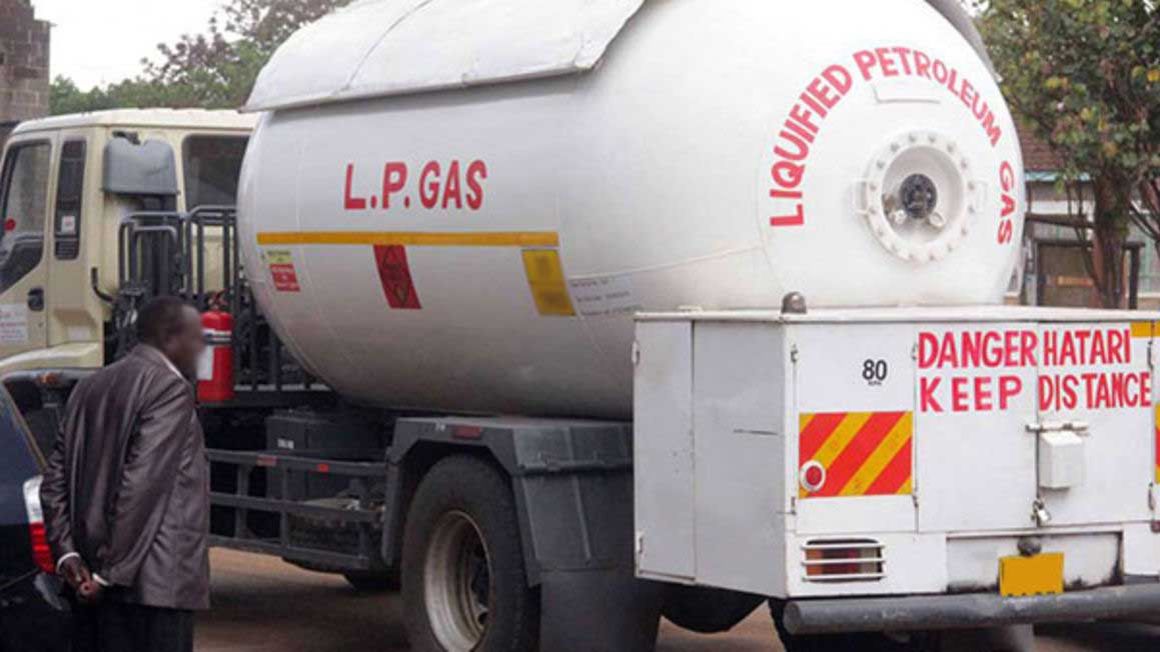 A truck ferrying liquid petroleum gas. There has been a snarl-up of trucks at the Kenya-Tanzania border town of Namanga following an impasse on clearing trucks. PHOTO | FILE | NMG

Kenya seeks to dominate in the supply of liquefied petroleum gas (LPG) by constructing the biggest import and storage gas facility in Mombasa and licensing more private companies to compete with Tanzania which has dominated the business for years in the region.

The announcement to construct a 25,000 tonnes storage facility by the Kenya Pipeline Company (KPC) which will connect to the Ksh42 billion new Kipevu Oil Terminal 2 (KOT) at the port of Mombasa comes few days after Kenya banned imports of gas from Tanzania through the Namanga border.

The facility in Mombasa once completed will quicken the loading of cooking gas for distribution by trucks which will help to cut demurrage costs.

KPC says faster loading is expected to translate to lower prices for LPG by 30 percent once operational as oil marketing companies pass the benefits of reduced demurrage costs to consumers.

“KPC proposes to install, commission and operate a 500 tonnes per day LPG truck loading facility which will enhance product evacuation and as such ease ullage constraints and subsequently reduce demurrage costs.”

Limited LPG storage capacity in Mombasa has meant that ships stay longer at the port, leading to higher demurrage costs which are then transferred to consumers thus paying high prices of bottled gas.

KPC currently receives imported LPG from ships berthed at the Shimanzi Oil Terminal and puts it into its tanks – T610 and T611 located within its Changamwe facility the product is then evacuated to local terminals through inter-connecting pipelines for truck loading and bottling respectively.

The lack of loading gantries for truck loading has been a challenge to gas companies and the facility once complete will allow companies to ferry gas in trucks which has proved to be economically viable.

With the completion of KOT2 with a capacity to connect different gas suppliers, the business which has been controlled by a few companies will end the monopoly as already five companies have applied to connect to the terminal at the port of Mombasa.

According to National Environment Management Authority (Nema) and Energy Regulatory Authority (ERC), more than five companies have applied to get license to construct gas facilities.

Some of the companies which have applied for the license to tap in the submerged gas pipeline from KOT2 include Aevitas Investment, Mombasa Gas Terminal Limited (MGT), Lions Gate limited, Focus Container Freight Station and Mansa East Africa Limited.

Once licensed, they will cater for the untapped LPG market with the increasing population and demand in the country and in the East African region.

Kenya imports about 40 percent of gas annually from Tanzanian liquefied petroleum gas (LPG) firms via the Namanga and Holili border posts and the remainder is imported through the Port of Mombasa.

The LPG cost in Mombasa is much higher than in Dar es Salaam LPG because the offloading and storage infrastructure at Dar es Salaam or Tanga ports is more efficient.

Early this month, Kenya started crackdown on gas importers from Tanzania as the country’s revenue authority Deputy Commissioner for Revenue and Regional Coordination Joseph Kaguru disclosed that the traders have been paying Value Added Tax (VAT) of eight percent instead of 16 percent.

Mr Kaguru added that the traders are shipping in the commodity from the Middle East and using the Namanga border point to pay lower taxes under the pretext they are sourcing it from Tanzania.

With the ongoing crackdown, Kenya is now is heavily relying on the new KOT 2 jetty project owned by Kenya Ports Authority (KPA) to open up the market, promote competition and to increase LPG consumption and reduce prices to citizens.

The new KOT2 project includes a dedicated berth and pipeline for LPG, which will now allow for larger vessels to call at the port of Mombasa promoting economies of scale and reducing handling costs drastically.