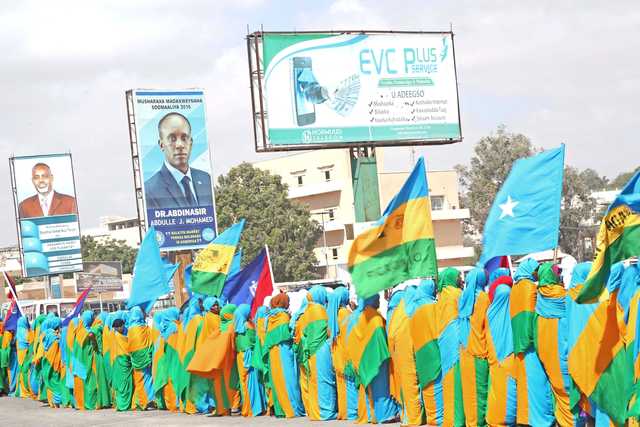 Somalia’s controversial oil deal with a US oil firm last week is raising suspicions in Nairobi amid an unresolved maritime border dispute between the two countries.

On February 19, Somalia’s Petroleum and Mineral Resources Minister Abdirashid Ahmed announced the signing of seven production-sharing agreements (PSAs) with Coastline Exploration, a US company co-founded by a Russian oligarch and based in Houston, Texas, which says it is “focused on the East African oil scene,” to proceed with plans to explore the oil and gas potential of the many prospects and leads identified in its offshore blocks.

Protest deal
But immediately after the announcement the country’s top leadership — the president, the prime minister and the auditor-general — declared the deal null and illegal.

President Mohammed Abdullahi Farmaajo said the move violated a presidential decree issued in 2021 banning engagements with outside entities during election time. Prime Minister Mohamed Hussein Roble said procurement laws had been flouted, a stance taken by the auditor-general as well.

But it was not just the Somalia leadership that was rattled by the agreements. In Nairobi, officials told The EastAfrican they were “concerned” about Somalia giving out exploration contracts for resources in an area whose ownership is still in dispute. A top-ranking diplomat, who declined to be quoted, said that while Kenya was not alarmed, it was watching the developments in Mogadishu.

“It does not alarm us. It concerns us, however. We are watching those companies very carefully,” said the source, who is privy to conversations in the government on the matter.

The deal has left Kenyan officials in a dither, especially after Somalia’s top leadership reversed the contracts, so Nairobi cannot even file a protest note to Mogadishu. But our source said they were concerned about firms entering into deals for resources in dispute.

Kenya and Somalia have been entangled in a maritime border dispute since 2014, when Mogadishu sued Nairobi at the International Court of Justice (ICJ) in The Hague, seeking to redraw their maritime boundary. In October 2021, the ICJ issued a decision, adjusting the delimitation line northwards, a verdict that Nairobi rejected, with President Uhuru Kenyatta vowing not to cede “even one inch” of territory.

While the ICJ decision is binding, Kenya still has a 10-year window to appeal, meaning the row simmers unless both countries decide to delimit the maritime boundary and enter into an agreement on exploiting the resources straddling it.

Prof Wafula Okumu, executive director of the Borders Institute, a Nairobi-based non-profit organisation that researches on African borders and disputes, told The EastAfrican that it is ill considered for Somalia to sign any deal touching on the disputed maritime space.

“Any action by Somalia related to the disputed area could aggravate the situation and complicate future efforts to peacefully solve the dispute,” Prof Okumu said.

Nairobi’s protests against border adjustments manifested again this week at the UN Security Council, when the country’s Permanent Representative to the UN Martin Kimani, while speaking on Russia’s recognition of two Ukrainian separatist regions as independent, said Kenya rejected “irredentism and expansionism on any basis, including racial, ethnic, religious or cultural factors.”

“We reject it again today,” Dr Kimani said. A Kenyan diplomat told The EastAfrican the speech was not only targeted at Russia’s aggression, but also a message that Kenya’s borders cannot be touched, too.

During the announcement on February 19, the Somalia Petroleum Minister did not name the blocks that were handed to Coastline Exploration. Somalia has more than 200 oil blocks, said to hold over a billion barrels of oil. Fifteen of these could be ready for extraction. But four are in the area whose boundary the ICJ delimited.

Dispute
Somalia has in the past roiled relations with Nairobi for conducting seismic studies in the disputed area, as well as marketing the oil stock there to investors. In June 2019, for instance, Kenya protested to Norway after one of its firms, DNO, used a contested map to determine the oil stock in Somalia. Another Norwegian firm, Spectrum Geo, raised further concerns after publishing seismic studies for Somalia to investors in London. Spectrum denied trespassing.

In Mogadishu, despite the public pronouncements that the latest deal was null, the Petroleum Ministry indicated it would defend it. An official told The East African that the necessary documents were being assembled before information is made public from February 27. “The agreement is a true deal that is part of the PSAs,” said the official, who asked not to be named due to the sensitivity of the matter.

Observers say the deal is likely to stall even if the minister defends it. Adam Aw Hirsi, a public policy specialist and a former government official in Somalia, told The East African that the deal violated an agreement between the Federal Government of Somalia (FGS) and the federal regions signed in 2018, which says that the FGS cannot sign oil agreements unilaterally.

“The FGS is in caretaker status and its president is on the ballot in the ongoing elections, so they cannot venture into major agreements,” Mr Hirsi said. The 2018 agreement stipulates that the Somalia Petroleum Agency, consisting of professionals from federal member states, is created for the purpose of processing and authorising concessions of this nature.

Some of those professionals were to sit on the Somalia Petroleum Agency (SPA) and scrutinise deals and recommend to the minister for acceptance or rejection. The SPA, though, is now without a chairman and chief executive after Ibrahim Ali Hussein was controversially sacked in 2021 without any reason being offered.

The oil firm involved in the controversy was incidentally formed the same year Somalia reached a deal to protect its hydrocarbons, after it emerged that some government officials were negotiating parallel deals.

Unlawful approach
In January 2021, a team of hired consultants issued an advisory to the Federal Government of Somalia, warning that the country’s approach to oil and gas exploitation had been in violation of the laws of the country. The three experts warned, in a confidential note seen by The EastAfrican, that the country’s financial assets would be exposed because “incomplete compliance significantly raises the risk of future legal and or compensation claims against the FGS while inadequate protection of FGS financial interest risks poor value for money over the lifetime awards that may last for 40 years or more.”

They proposed seven guidelines, including sticking to procurement laws that must also require that contracts be given out based on environmental assessment and negotiations justified by the intergovernmental team. They also recommended consultations with federal states and that PSAs be guided by direct negotiations, not third parties.

“PSA negotiations do not prioritise short-term revenue such as bonuses at the expense of long-term value such as royalties and other benefits,” they advised. “Allow awards only where at least two bids have been submitted for a block.”

At the time, Somalia’s president had a month left on his four-year mandate, as elections were scheduled for February 8, 2021. They did not happen, and President Farmaajo used his extended caretaker status to ban further negotiations or agreements with outside entities until elections are held. The latest deadline of February 25 was again missed and the polls pushed back for another three weeks.

The decree issued in August 2021 did not specify oil deals, however. It also came amid a feud with Prime Minister Roble, whom he also banned from hiring or hiring ministers. Mr Roble defied this suspension of his powers. In Somalia’s federal government, ministers are appointed by and report to the prime minister.

“Hammering out deals on behalf of FGS during elections is in contravention of Presidential Decree (7/8/2021), which aims to protect public resources from exploitation to safeguard our national honour,” President Farmaajo’s spokesman Abdirashid Mohamed Hashi said. “The purported agreement by the Minister of Petroleum is illegitimate.”

Ahmed Aidarus, a Somali political analyst, said on Wednesday that the recent agreements with the American company could be a political manoeuvre to divert public attention from irregularities in the ongoing elections.

“In an election season, I cannot believe anything done by politicians as genuine,” Mr Aidarus said. “It is likely to be a temporary arrangement that will be dismissed later as error.”

“The alleged agreement signed by the Minister of Petroleum regarding Somalia’s oil resources is illegal and did not go through legal channels, and therefore does not exist,” the PM’s office said in a statement. “The Prime Minister will take legal action in response to this act that violates the safety of our national assets and the legacy of future generations to safeguard the trust of the Somali Nation.”

For now, Somalia’s General Public Prosecutor Sulayman Mohamed Mohamud has ordered investigations into the issue as “a follow-up of the preliminary enquiries made by the Auditor-General.” The Petroleum Minister did not respond to questions by The East African, although he publicly defended the agreements as based on guidance from the president.

“President Farmaajo and I were closely in touch, working on this deal over a long time, including the coming to Mogadishu of the leaders of the company involved in the PSA back in January 2020, but the accord was delayed by technical hiccups,” the minister said in an interview with VOA Somali Service.

According to him, Coastline Exploration had been given the green light to explore oil in Somalia by former President Hassan Sheikh Mohamoud. “If it had faults, I would not have announced,” the minister said. But on its website, Coastline says it was formed in 2018. Jake UIrich, its chairman, said the deal arose from “a rigorous negotiating process.”

“This marks a defining moment for the country. The way is now open for other oil and gas companies to join us in our quest for commercial discoveries through the current licensing round and, also through direct negotiations with the Somali oil and gas authorities,” he said. Though details of the PSAs were not given, there are indications the firm will pay $7 million and invite other investors to join in.

Mr Ulrich said the signing ceremony was witnessed by officials from the Somali Petroleum Agency, thus giving it legality. But he did not clarify whether they had been involved in the negotiations. The firm did not respond to questions sent by The East African via e-mail.

Despite saying it is focused on “East Africa’s oil scene, targeting discovered hydrocarbons in Kenya, Uganda, Somalia, Tanzania and Mozambique,” the firm is largely vague in its operations, as it has little physical presence in the region.

Co-founded by Russian oligarch Alexander Djaparidze, 67, the firm shares two board members with Eurasia Drilling Company, a Russian offshore-onshore oil driller that operates almost exclusively in Russia, although it has a presence in Iraq. The board members include Simon Ayat, who joined the EDC Board in 2019 and has been on the Audit Committee of the Board since 2020, as well as Mr Djaparidze.

Mr Djaparidze, once awarded the Russian Federation Prize for special achievements in science and technology, is considered among the richest “self-made” Russians today, with a net worth of $1.2 billion, according to Forbes magazine.

He started out by “buying outdated seismic facilities abroad in the 1990s and offering exploration services in Russia.” He bought a drilling subsidiary of Russian oil giant Lukoil for $130 million in 2004, which morphed into the Eurasia Drilling Company. In 2017, Eurasia announced that its shareholders agreed to sell a 51 percent stake to Schlumberger, the firm that had, incidentally, bought his first company, Petroalliance.

His role in Coastline is stated as non-executive director. When Somalia launched its offshore exploration hopes in 2013, it struck a deal with UK-based Soma Oil & Gas. Soma was backed by Djaparidze and Coastline chief executive Richard Anderson was a board member at the firm.