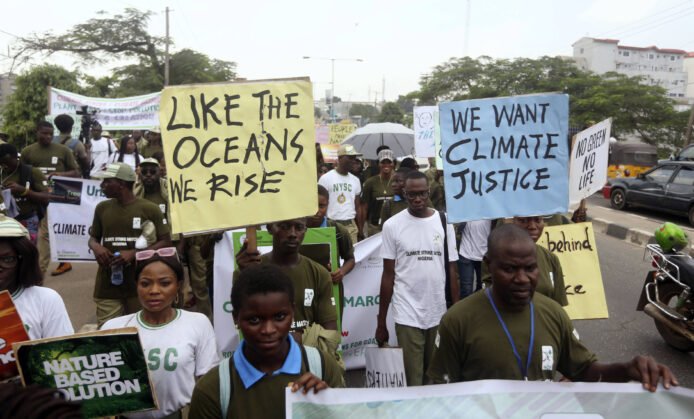 This week, governments of more than 100 developing nations – many of them African, and all of them least responsible for global emissions called on their wealthy counterparts to make bolder steps in the fight against rising temperatures. For the UK, as host nation, COP26 provides an opportunity to heed their call and demonstrate leadership in what most people believe is the most important crisis facing humanity. Climate change is the agenda-setting issue for many of the UK’s key partners, especially those in Africa already experiencing the devastating effects of climate change. Nowhere is this more apparent than in Nigeria, Africa’s most populous country and biggest oil producer.

In a country where 70% of the population depend on income from agriculture, Nigeria suffers from the increasing frequency of climate-related catastrophes from desertification in the north to devastating floods in the central belt and south.

Man-made causes include gas flaring, deforestation (mostly caused by wood-burning for cooking) and uncontrolled urban development. Given its population is projected to double to 400 million by 2050, Nigeria cannot afford to ignore climate change. And yet it will continue to depend on revenue from oil and gas exports for the foreseeable future.

Nigeria has made some concerted efforts to tackle these threats, especially through the development of solar infrastructure. But its continued reliance on oil marks it as a perfect example of a nation that has the desire to take part in the energy transition, while needing support from allies to make the move economically viable.

Under the Paris Agreement, Nigeria undertook in 2017 to reduce its greenhouse gas emissions by 20% by 2030, but noted that with international support through climate financing, this figure could rise to 45%. A new Nigerian Nationally Determined Contribution (NDC) is expected before COP26.

The UK will be looking for a more ambitious plan this time around. Some clues to Nigeria’s intentions can be found in its recent Interim NDC which refers to plans to eliminate kerosene lighting, increase the uptake of bus rapid transit and reduce residue crop burning by 50%.

But Nigeria will need to go beyond these steps to address the big issues. The key sectors to tackle will be energy and agriculture, which are responsible for 60% and 25% respectively of Nigeria’s emissions.

On the former, the government has focused on gas as a transition fuel, and renewables – in particular solar. Five million households are already connected to solar power. Clear progress has been made in the government’s plan to provide off-grid solar energy to a further five million households by 2023, with support from the UK government’s Solar Nigeria Programme, though hurdles remain, in particular oversupply and taxation issues.

Gas flaring has reduced by over 70% in the past 10 years. The government has committed to sustainable agriculture, and reforestation, notably through President Buhari’s call to Nigeria’s youth to mobilize and plant 25 million trees – working to restore four million hectares of forest as part of the Bonn Challenge.

This is promising, but moving away from dependence on fossil fuels is no easy task, especially for a country whose economy has been built on the back of the oil sector.

This essential energy transition will not be economically viable for Nigeria without serious investment from the government, collaborating with foreign partners and groups like the G7. That’s why it is so important that the pledge in Paris to provide $100bn per year in global climate financing must be kept. The private sector must play its role too: investing in renewable energy projects in Africa is not just a good thing to do, it makes economic sense. The biggest challenge in Africa is providing good, sustainable jobs for increasing numbers of young people entering the labour market. With support and investment, these jobs can become an essential factor in turbocharging Africa’s green growth.

As UK High Commissioner to Nigeria, I understood the importance of the UK-Nigeria partnership in promoting Nigeria’s sustainable economy. Tied to the Nigerian government’s own efforts, the UK should continue to bring innovation, investment and commitment to helping Nigeria make a success of this transition.

Adaptation, mitigation and climate finance will be the key to success at COP26 in Glasgow. A successful summit will give Africa confidence that, as the continent least responsible for climate change, but most directly affected, the world is collectively turning the corner towards a more sustainable future. And those most responsible for the causes and effects of climate change have a particular role to play in providing the finance needed for Africa’s transformation.

The UK and Nigeria have moved beyond the colonial relationship of the past. Partnership is the new watchword, as the Nigerian economy matures and discovers a dynamism, particularly in tech, that is making overseas investors take note. To secure a bright future for Nigeria and its growing population, that partnership must urgently address the twin challenges of tackling climate change and securing economic growth. They are not mutually exclusive. At Glasgow in November, I hope to see both these goals come together in the global effort to reduce global warming and guarantee a prosperous future for generations to come.