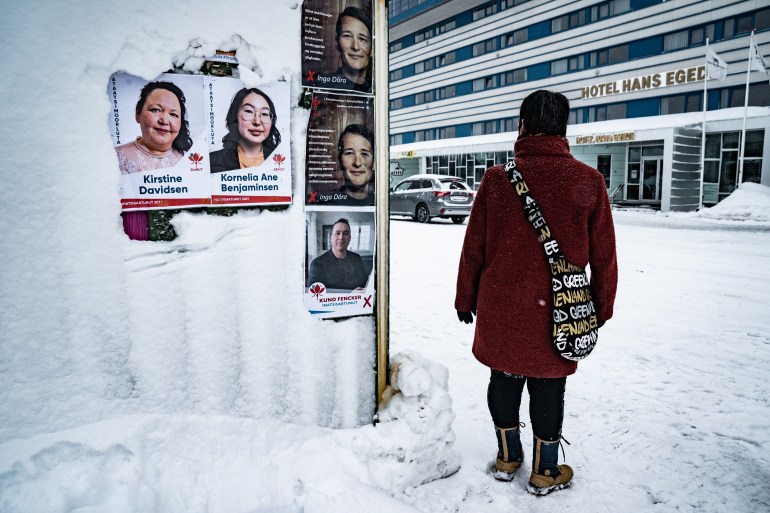 Greenlanders are bracing for a snap election that is being viewed as a referendum on a controversial mine that has not yet opened.

Kvanefjeld, the rare-earth mineral project near Narsaq in southern Greenland, has divided the political system for more than a decade, and is of significant importance to the global mining industry.

Greenland Minerals, an Australian company, owns the site and China’s Shenghe Resources is its largest shareholder.

According to the company, Kvanefjeld has “the potential to become the most significant Western world producer of rare earths”.

On Tuesday, Greenlanders will vote for their national parliament, the Inatsisartut, and municipal representatives.

The decision to greenlight the mine was one of the reasons snap elections were called and has dominated the campaign period.

In late November, Prime Minister Kim Kielsen, who paved the way for Greenland Minerals’ preliminary approval, lost the leadership of his social democratic party, Siumut (Forward), to a former minister in his government, Erik Jensen.

But when Jensen then expressed doubts about the mine, one of the coalition parties, the Demokraatit party (Democrats), left the government, and Kielsen lost his majority.

The biggest opposition party, Inuit Ataqatigiit (Community of the People), has promised to not give a mining licence to Greenland Minerals.

Even though the pro-separatist party is not against all mining, its Member of Parliament Sofia Geisler said they are opposed to extracting processes involving uranium and thorium, two radioactive by-products.

The Siumut party has governed the island, home to about 56,000 people, for all but one term since autonomy in 1979. But according to recent polls, Inuit Ataqatigiit will win the election and become the biggest party in Greenland.

Siumut has argued that the mine is vital for Greenland’s economy and its future ability to become independent from Denmark. The mining company promises that Greenland will receive 1.5bn DKK ($240m) annually for the 37 years they plan to operate the mine.

“More than 90 percent of our economy is based on fishing,” said Siumut leader Jensen. “We have to develop other industries in order to become more independent.”

Greenland has the world’s largest undeveloped deposits of rare earth metals, according to the United States Geological Survey. The rare-earth minerals in the mountain that Greenland Minerals wants can be used in the production of electronics, aerospace, and – as pro-miners like to point out – electric cars and other climate-friendly products. The mountain also contains large amounts of uranium that can be used for nuclear power plants.

The Australian mining company has promised more than 700 jobs in the mine, and that about half of those jobs will be occupied by locals in the beginning – opportunities for some of the 6,500 people who live in the Kujalleq municipality, home to the Kuannersuit mountain and the mine project.

The municipality has experienced a sharp decline in population over the last decades, and in Narsaq, the village closest to the potential mine, more than 10 percent were unemployed in 2019.

But promises of employment have done little to soothe fears among some locals.

“No one will buy meat from a lamb that lived next to a uranium mine,” said Piitaq Lund, a 31-year-old farmer whose 550 sheep roam the area close to the mountain. The region is the only part of the country that has a climate suitable for farming.

Worried that the mine will see an exodus of families, Lund decided to run for a seat in the municipal council for Inuit Ataqatigiit, to have a say against the mine project.

Ellen Frederiksen, a 61-year old teacher, lives alongside Lund in Qassiarsuk, a small sheep farming village near the mountain of 30 people. She worries about the uranium dust from the mine and fears a dam will hold the toxic waste.

“We are leaving them [future generations] the problem of making sure that the dam doesn’t overflow or break,” she said. “I just think it is extremely ill-considered.”

Minik Rosing, a Greenlandic geologist at the University of Copenhagen, said he understood locals’ concerns.

“What if the dam doesn’t hold for the thousands of years it has to?” he said. “It’s difficult to conclude scientifically if the mine is a bad or good idea … But the worries are legitimate.”

Jensen claims it is important to extract the minerals because they can be used in the fight against climate change.

Rosing does not buy this argument, however, because the rare-earth minerals are not a scarce resource.

“Geologists often say that rare-earth minerals are neither rare, nor earth. They’re all over the place,” he said. “It’s not like you are morally accountable for climate change if you don’t take advantage of these minerals.”

Looking to Tuesday’s vote, although Inuit Ataqatigiit has strong support, Siumut is the oldest party with deep traditions in many parts of the country.

There are 31 members and seven parties in the parliament. Whoever manages to make a coalition of at least 16 MPs gets to be in government.

Jensine Berthelsen, political editor at Sermitsiaq, a daily newspaper in Greenland, said that Inuit Ataqatigiit might have problems finding government partners because of its strong stance against the mine.

“It’s going to be tough negotiations because of the mountain,” she told Al Jazeera.