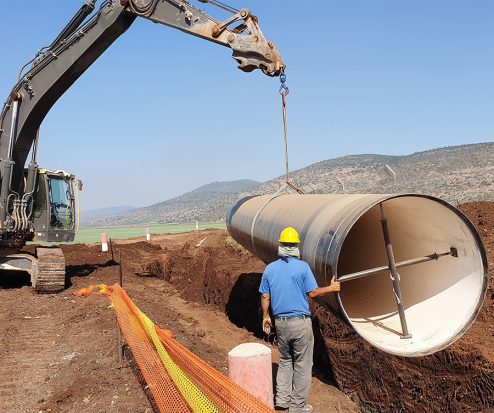 French President Emmanuel Macron has signalled his support for Total’s US$3.5bn East African Crude Oil Pipeline (EACOP) as France’s biggest banks shun the project. With oil and gas investments falling out of favour in the eyes of investors, the pipeline could well be the continent’s last major foray into fossil fuels.

Macron stated the project will be a “major opportunity to intensify trade between our two countries and to further expand our co-operation”, in a letter to recently re-elected Ugandan President Yoweri Museveni published by the East African nation’s government on May 1.

It follows reports that the three largest French banks, BNP Paribas, Crédit Agricole and Société Générale will not provide finance for the proposed 1,445km heated oil pipeline running from Hoima, Uganda to the port of Tanga in Tanzania.

Macron’s statement appears to go against the sentiment of his administration’s policy. France stopped providing state-backed guarantees to projects involving shale and bitumen this year, and will halt support for all types of oil from 2025 and gas from 2035.

The French banks join Barclays, Credit Suisse and ANZ in choosing to avoid the project. The UK’s export credit agency (UKEF) also ruled out its involvement the project in March. The African Development Bank has said it has not allocated funding to the pipeline and is “strongly committed to renewable energies”.

It is a win for climate activists who have been campaigning against the pipeline. “The fact that BNP Paribas, Société Générale, and Crédit Agricole, who normally have no problem financing Total’s operations, consider the EACOP project too risky to finance sends a strong message to other banks,” says Henrieke Butijn, climate campaigner at BankTrack, an NGO.

Key engineering, procurement and construction contracts will be awarded shortly, says Total, with the first oil export planned for early 2025. Once oil is extracted, it will be refined in Uganda to supply the local market and exported around the world via EACOP.

Environmental activists have repeatedly raised concerns about the project. “The crude oil pipeline will threaten water resources, biodiversity and Uganda’s oldest and largest nature reserve, the Murchison Falls National Park, which would be opened up to large-scale oil extraction at a time when the world is acting to urgently reduce its reliance on fossil fuels,” Fredrick Njehu, Greenpeace Africa senior political advisor, said at the time of the agreements. For Uganda, the pipeline is “absolutely crucial”, says Robert Besseling, founder and chief executive at specialist intelligence firm Pangea-Risk.

He explains that much of the economic modelling for the country has already taken into account eventual foreign exchange revenues from the export of oil as well as increasing local refining of petroleum products. Because of this and due to the lower demand for crude oil globally, Besseling says that Total has been able to negotiate better deal terms with Uganda’s government.

“Uganda’s desperate need for finances is likely to have motivated the URA’s [Uganda Revenue Authority] softer stance on the pipeline deal. Total is now set to pay no taxes until it has recovered its capital investment,” analysis by Pangea-Risk reads. Other risks to the project now also include “the more belligerent nationalistic outlook by the Tanzanian government towards foreign investment, particularly Western but also Chinese”, as well as “the issue of political instability and reputational and corruption risk in Uganda”, says Besseling.

At least 45 people died in protests in Uganda towards the end of last year after presidential candidate Bobi Wine was arrested. EACOP has been squeezed through and kept afloat during the pandemic while other oil and gas investments in Africa have been delayed or shelved.

For example, BP declared force majeure on the Greater Tortue Ahmeyim gas project on the maritime border between Senegal and Mauritania in April last year. Elsewhere, Total called force majeure on its US$20bn liquefied natural gas plant in Mozambique’s Cabo Delgado province last month due to escalating violence and insurgent attacks. It comes as UKEF is facing a review of its backing of the project.

“The outlook is shifting towards renewables,” says Besseling. “And given what’s happened in Mozambique recently, this really could be Africa’s last major fossil fuel project.”