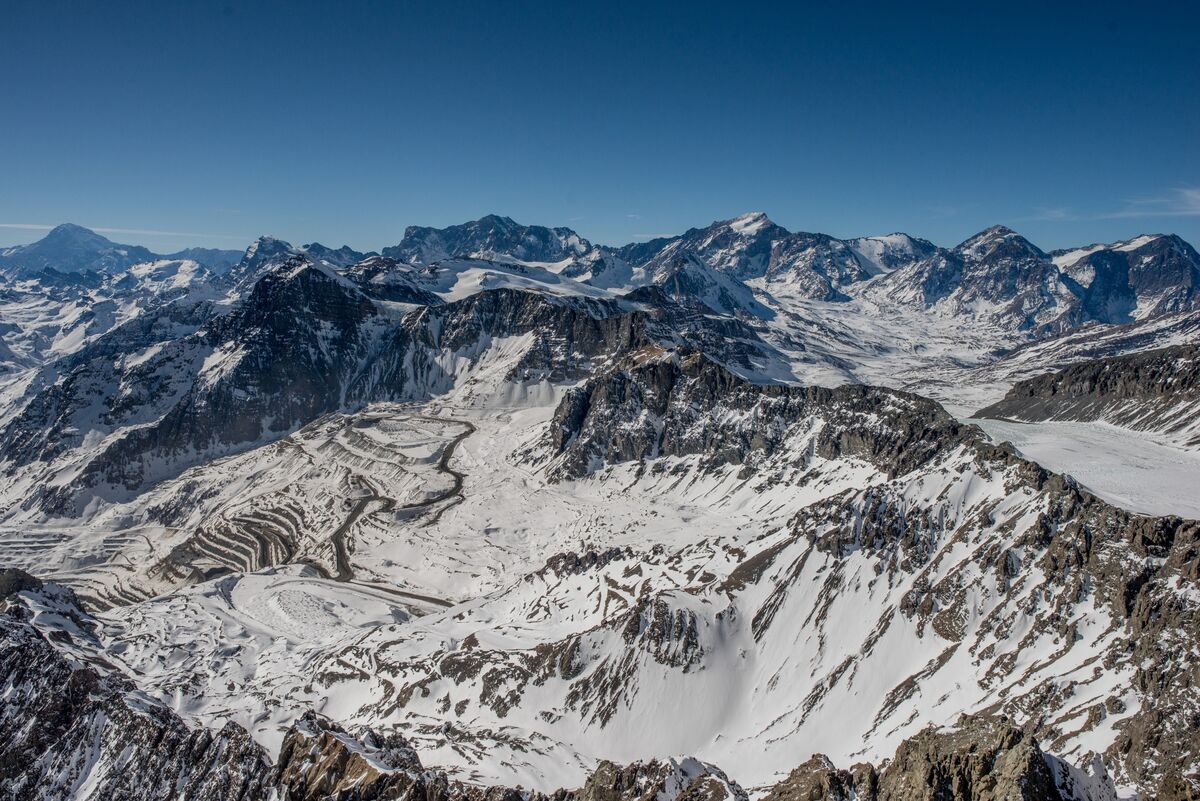 The Andina copper mine and Olivares Alfa glacier in the Andes Mountains near Santiago, Chile, in 2019. (Image source: Bloomberg.com).

By: Valentina Fuentes and James Attwood

Chile’s government is looking at a gradual implementation for a proposed ban on mining near glaciers in order to limit the impact on some of the world’s biggest copper mines and their planned projects high in the Andes. In an interview Monday, Mining Minister Marcela Hernando identified about 20 mining sites that are in protected areas, some of them close to glaciers, such as Codelco’s El Teniente and Andina and Anglo American Plc’s Los Bronces.

“There has to be a period for that transition,” she said. “One understands that from now on, no new task will be able to be near glaciers.” Hernando spoke after the Constitutional Convention approved an expansion of environmental governance that also includes reshaping water rules. BTG Pactual estimates that new protections for glacial and other sensitive areas put about a fifth of Chile’s copper output at risk. That’s a big deal as the industry grapples with growing demand for the battery metal in the energy transition.

Assuming the charter is ratified in a September referendum, the government of 36-year-old President Gabriel Boric will have to strike the right balance between overhauling environmental and social rules while maintaining Chile’s investor appeal at a time when mines are getting trickier and pricier to build. The Convention is debating implementation measures for the new magna carta.

To be sure, the industry is already moving in that direction, switching to renewable power and seawater amid a 12-year drought, looking at ways to replace diesel and engaging local communities more. But the pace has been too slow, Hernando said. As a result, the state must play a role to accelerate ESG efforts via public-private initiatives or, in the case of lithium, through the creation of a national company, she said. It’s unclear how the proposed expansion of environmental governance would affect extraction of lithium in the salt flats of the Atacama Desert. Producers are already exploring new ways of operating that don’t involve pumping up brine into giant evaporation pools, Hernando said. “In that sense, the new constitution will be able to speed up this process and it seems to me that this is absolutely positive because no one can ignore the damage that has occurred in the Salar de Atacama for so many years.”

The government also wants to bolster domestic smelting by investing in state-owned plants and introducing new technologies via public-private partnerships. It’s working on a project to upgrade the Paipote plant run by state-owned Enami and is interested in retrofitting other smelters built decades ago. “Ideally,” Chile would add to its seven current plants, she said.

It’s the latest attempt by a major raw-material producer to capture more value downstream at a time when the pandemic and the war in Ukraine accelerate the splintering of traditional trade ties and spur efforts to foster local industries, especially those involved in the transition to cleaner energies. But boosting local processing also means big investments and more energy use and emissions. Doing so far from the demand centers of Asia and Europe can also be a challenge, especially given China has plenty of spare capacity.

“We have to strengthen the smelting capacity of our country and with that we are talking about industrialization — but sustainable and without neglecting our ambitious goal of carbon neutrality,” Hernando said. Chile is also in discussions with Argentina and Bolivia on ways to add value to their mining industries, particularly in lithium, with Mexico recently added to the talks, Hernando said.
The left-wing government is also looking for mining to contribute more to social spending. It plans to increase taxes for the sector, although the total burden shouldn’t surpass 50%, Hernando said. Consulting firm Plusmining estimates the current tax burden at about 40%. The fairest measure, which also accounts for the quality of the deposit, is an ad valorem tax of 1-3%, which is a way of paying a kind of right to exploit, different from income taxes, Hernando said.

The new tax burden will still mean companies invest in Chile, she said: “We have to continue to be a competitive country in this matter.” She played down the risk for the mining industry if a reference to the nation’s concession model is removed in the new constitution. “What we are doing is leveling our legislative system in mining matters to what is happening in other countries,” Hernando said. “There are basic and fundamental things that must be established in the Constitution and the rest should be regulated by simple laws.”